What is a softstarter and where is it used?

A softstarter is a device that gradually increases the voltage to a motor instead of giving the full voltage directly. The softstarter allows for smooth acceleration instead of a sudden burst of power.

How does a softstarter work? 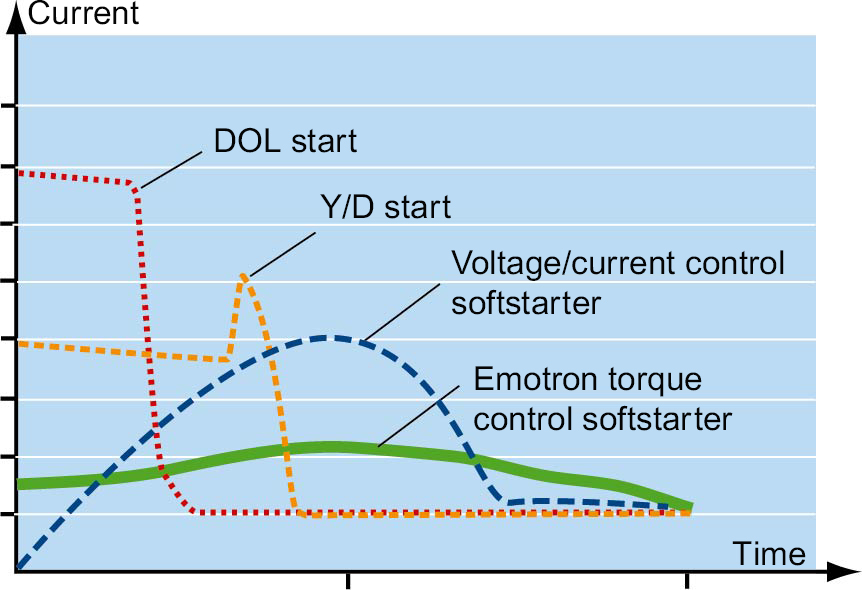 Using Emotron softstarters when stopping you can benefit from the same smart principle as when starting it – a linear stop using the torque control. 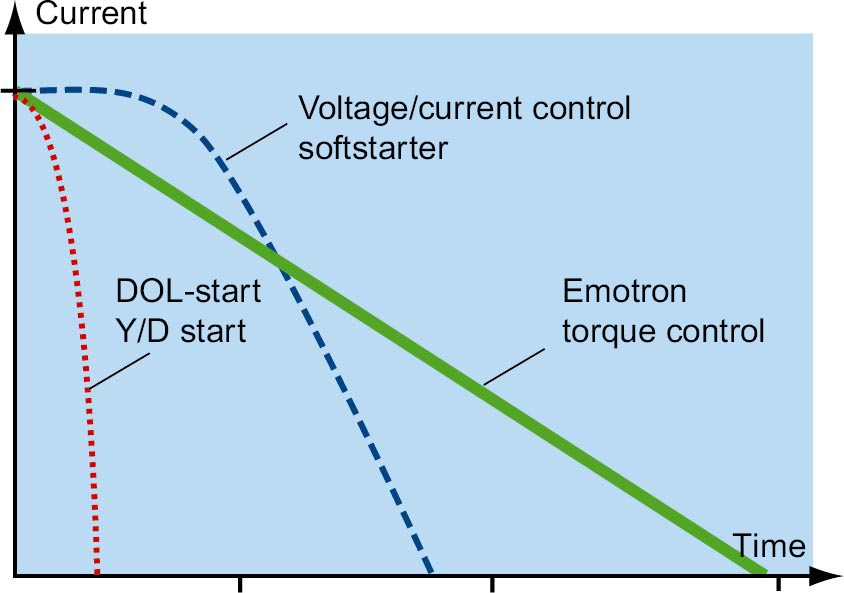 There are two types of Emotron softstarters and they both work with 3-phase torque control. 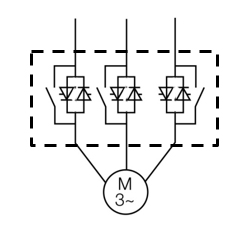 Working principle of the softstarter

With The Emotron MSF softstarter the voltage to motor is controlled by means of the thyristors also after the starting phase.

The Emotron TSA softstarter is using thyristors to control the voltage to motor only during starting and stopping phases. At full speed the built-in bypass contactors are switched in to conduct the motor currents.

Emotron softstarters also contain Emotron load monitoring technology. This observes the load torque of the motor driving the process or machine. It continuously calculates the motor torque using the built-in motor model. The result is a correct and linear motor load value across the entire load range. Any deviation from the set load levels will immediately cause the monitor to initiate a warning or stop the machine.

Where can I use a softstarter?

A softstarter can be used for any motor that requires a controlled and smooth start and stop. Emotron softstarters gives you a value added cost efficient means of controlling not only the startup and stopping phase but also observing the motor and machine load while running the motor. There are numerous applications, where the following are most common;

When using pumps in a process there is a risk of pressure surges. Using a soft starter and feeding the voltage to the motor in a gradual progression greatly reduces this risk to a pump application and water hammering in the surrounding piping. The internal load monitor will also detect e.g. cavitation or if a pump is running dry.

A conventional Direct-On-Line start could put a lot of stress to the mechanical components of the conveyor belt. Conveyor belts are easily damaged if subject to a sudden start. A single jerk could result in a misaligned belt. By installing a soft starter, the conveyor belt will start up more smoothly by applying motor torque gradually. This can save many hours downtime. The Emotron Load monitor function will give possibility to catch e.g. a misaligned belt or other mechanical problems.

Softstarters for fans and blowers

Fans with belt drives also face a potential risk of slipping due to a jerky start. Using an Emotron softstarter eliminates this problem by applying a smooth torque controlled start. The internal load monitor in the Emotron softstarter will notice if a fan filter is starting to be blocked.

The internal load monitor in the Emotron softstarter will notice if a compressor is idling, allowing for energy savings by stopping.

Why should I use a softstarter from Emotron?

A softstarter allows you to lower your power consumption during starting. Instead of using full voltage from the start, the gradual voltage increase means that less power is used. The Emotron softstarter also makes it possible to adjust starting time.

The Emotron softstarter also contains a load monitor function, which warns if it detects a deviation from set load levels, signaling or even stopping any equipment experiencing trouble. This gives you protection against dry running, blocked pump, broken belt.

Your Emotron softstarter will improve overall operational efficiency and extend the lifetime of your critical equipment.